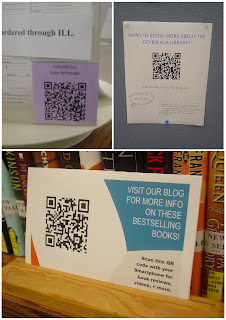 A QR (quick response) code is similar to a barcode. It contains info that can be read by smart phones with cameras, a QR reader app, and web capabilities. Embedded in these codes are web addresses, coupons, messages, or special offers.

You can find a list of QR code readers to download to your mobile device (iPhone, iPod Touch, Android, and more) at http://www.mobile-barcodes.com/qr-code-software/.

How is the Devereaux Library using QR codes?
You can find QR codes all around the library, linking you to Interlibrary Loan resources, the New Bestsellers blog, and lots more! Simply scan the codes with your mobile device and you will have instant access to these services.

Welcome back to campus

What a busy summer it’s been here at the {salt} Mines. There is so much to tell you. Deep breath:

See photos from the Grubby Green dedication at http://dlsd.sdln.net/u?/sdsmt,17755

· Many other pictures and documents are available at http://dlsd.sdln.net

Dr. Harry Orville came to the Black Hills and the South Dakota School of Mines and Technology in February 1965. Dr Orville helped establish the Department of Meteorology, the academic arm of Institute of Atmospheric Sciences. Orville became department head in 1974, serving for twenty years in that position. He also served as interim vice president at SDSM&T in 1987 and 1993, and as acting director of IAS. Upon retiring from fulltime teaching in 1996, Orville was named a distinguished professor emeritus in the Department of Atmospheric Sciences.