Library Building Renovation 2021 -- and so it began…

Planning for a renovation is never easy, especially for a library that has been in operation for over 100 years. A major part of the planning process was to determine which furnishings and materials to keep. We were grateful to have faculty members that took the time to review materials in their field and gave us some recommendations.

Over several months, library staff, student workers, and facility workers put in a massive effort to pack up library assets. Thousands of books and other materials were packed and placed in storage. Hundreds of shelves had to be cleared and dismantled. Some were stored and will be reassembled after the renovation is complete. Others were sent to non-profit organizations or discarded. 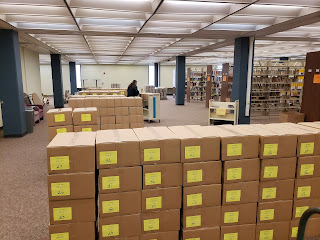 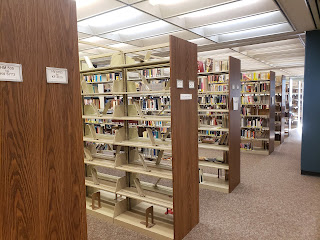 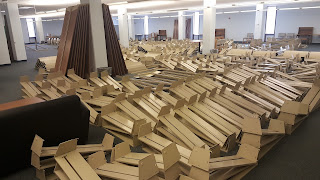 In May, library staff moved to our temporary location in the Dakota Building at 306 E St. Joe.  There is not have enough space for our remaining print materials, so the vast majority was boxed up and placed in storage. Fortunately, some departments made space and volunteered to house a few of our books during the renovation.  A big thank you to Vladimir Sobolev & Connie Krosschell (Physics 227), Laurie Anderson & Nathaniel Fox (PRL), Johnica Morrow (Surbeck 143), Travis Walker & Joshua Adeniran (CBEC 201), Margaret Smallbrock & Aaron Grimm (CBEC 1104), Bryce Tellmann (CB 311), and Krishnan Veluswamy (CAPE) for ensuring these materials will be available for use!

Welcome back! We’re so happy to see you – even though you may not see us. As you know, the Devereaux building is being renovated and the library is – well, just not there anymore. We are here, though, enjoying new views from the Dakota Building, 306 East Saint Joseph (just across the street from Rocker Square II). Most of the library’s physical materials are in storage for the time being.
Library services and resources are still available. There are hundreds of thousands of electronic resources available via the library. E-books and journals can be found at https://www.sdsmt.edu/.../Resources/ElectronicResources/
Interlibrary loan is also available to help you get the material you need.
If you need assistance, contact us, we’re here to help. Give us a call, 605-394-2418 or email library@sdsmt.edu

The library building is being renovated!

The Devereaux Library’s emphasis will focus more on its digital resources as it is being reduced in space and physical holdings to allow for two more floors of the building to be repurposed for use by non-library affiliated departments and services.

During this process, the library staff will be working from a temporary location at 306 E. Saint Joseph St. and most of our print materials will be placed in storage.  The library’s study areas and ready access to print materials will be unavailable for the duration of the renovation, however, our interlibrary loan program, digital resources, and library instruction services are still operational and library staff can help patrons utilize these services.  Most research materials from archives and special collections are available for use during this time but an appointment is required to view these items.  The library also continues to offer our popular movies.

What the renovation plans encompass:

The exterior plans call for replacing most of the bricks at the front of the building with large windows.

The first floor (garden level) will continue to house the Industrial Engineering department.

The third floor will house a Makerspace, Testing Center, Slide Rule (for students needing math help), and have private study rooms, as well as common areas where students can gather to study or socialize.

The fourth floor will contain the library.  Here students can get help with research assistance and will have access to a wide range of materials.  Books on various subjects including both non-fiction and fiction titles as well as movies and audiobooks will be available for check out.  Campus archives will be housed in the library with the Special Collections.  The library also provides a South Dakota Reading Room where you can find a wide range of materials focusing on South Dakota topics.  A smartboard and quiet study spaces will also be available for our patrons.

The elevator and restrooms on the first and third floors will be enlarged to meet ADA standards.

The building’s air handling system and plumbing will also be updated.

I thought it would be interesting to find something in Access Science I could do at home. I found one using eggs, however of the three experiments only one was something I thought I could do… I could cook an egg in alcohol (rubbing), which is why it is not edible or get an egg to bounce using vinegar or turn the whites of an egg green. (I had thought it might be the yolk to turn green ala “Green Eggs and Ham”, but no.} Red cabbage is used for that experiment. 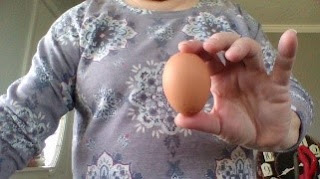 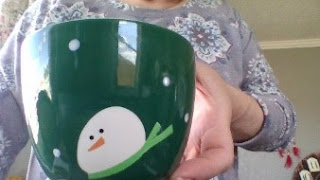 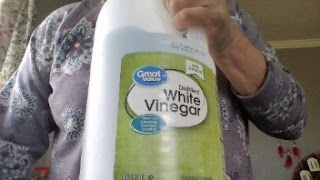 The experiment As I did not have any red cabbage or rubbing alcohol, I went with the bouncing egg. I did have vinegar and eggs and a glass. It will take 24 hours for the shell to become soft enough. Here goes. I had to improvise as I do not have a clear glass, so went with a small bowl. I still think it should be fine. The egg bubbled just like the video said. Now I have to wait and see if I get a bounce.

24 hours later: Well, the egg was softer and had bubbled and foamed as expected. My egg being brown also lost color. As the shell was soft, I squeezed the sides to see what would happen, it made me think of a water Balloon. I dropped it from about six inches, it bounced a little but did not break, tried a foot, bounced and rolled, did not break I got brave and tried it from 2 feet that did not work, the egg broke. It could have been the fact I was using a card table with a soft top that allowed me to go so high. It was still fun. Give it a try see how you do try a something different. There are many experiments shared in the Access Science database. See what you can find. You'll need to log in via VPN for all of the links to work.


Reference AccessScience, s.v. "Egg-cellently Weird Science Experiments," “This video walks you through the chemistry behind protein denaturing, making an egg bounce, and creating your own green eggs (minus the ham).” Access Science.

Spring is here! It's time to get outside and do some yard work and our electronic resources can help. Use the links below or find your own to get some ideas and information on gardening and landscaping.

You'll need to log in via VPN for all of the links to work. As always, if you need help accessing these or any of our other electronic resources, contact our reference personnel at library@sdsmt.edu for assistance. Karen Vieira Devereaux Library (605) 394-1258

Stay-cation two: ORIGAMI OR WILL I?

I decided to see what the library might have on Origami.(You'll need to be on campus or using VPN to follow the links) I thought everyone has paper, right? So, in looking for some inspiration for a simple project I typed Origami in several of our databases. To my surprise, origami was used in several different applications in dealing with information on the universe, electronics, math, health etc. Because origami is in fact mathematical folding it can be used to provide visuals for all sorts of ideas and projects.


Looking for a project to share I used “Academic Search Premier” and found: “How to Fold It: The Mathematics of Linkages, Origami, and Polyhedra” Author: O'Rourke, Joseph. There is a PDF of the book so the material can be viewed online or downloaded.


As I had not done a lot of origami, I decided that I would go for a simple shape and see How it would go. As it turned out, there were not any simple shapes I could try.

However, I am including this as there may be more adventurous people out there.

So, I continued to look, I found a short article on making origami Tulips “A Bouquet of Tulips” By: Ratcliffe, Charmaine. U.S. Kids. Apr/May2001, Vol. 14 Issue 3, p20 and thought I would try that.

I didn’t have construction paper but did have several different notepaper packs and decided to see what I could use. If the shape was the same size, what could go wrong, right? I couldn’t find a ruler, so I used my 2 ½ in square for quilting. I figured I could use it to get my 4” squares. I made my template so I could make more. I folded my square in half, then folded the edges to the center. What I did not realize is that you must unfold it then fold it.


So on to try two. I used the edge of my of my quilting square to crease the edges, or you can use your fingernail. Then fold the other side the same way as the first. Unfold.


Cut out the four corners. Cut down the center of the remaining squares to the first fold. Slide one square left to cover the square next to it. You can tape or glue. I glued, so I had to wait for the glue to dry.

I did not have pipe cleaners either, which the instructions said to use for the stem. Instead I glued a couple of the extra squares I had cut off the original square to a toothpick. Let that dry then put a small hole in the bottom of my tulip and pulled the end through. A dab of clue will help the stem stay in place.


Small leaves can be created and glued or taped to the stem. Done!


This shows that even if you do not have the exact materials needed your can still create a fun project with what you have. Just think outside the box.